A few years ago, I would never have imagined planning a funeral.  I wouldn’t have wanted to think about what that would entail and how that process would even come together in a few short days.  I hadn’t spent any time thinking about what I would want for my funeral or even where I would want to be buried.  Planning a funeral was not something that I thought I would be doing anytime soon and truth be told, I hoped someone else would have to plan mine long before I would have to plan theirs.

Having been in the military for 17 years, Ben had what he wanted planned out.  He knew who he wanted to deliver the eulogy, who he wanted to preside over the service and that he wanted to have an open casket.  When it came right down to the big decisions, we had his assistance in the planning, which made a huge difference for someone who wasn’t ready or willing to decide those things.

We sat down with all his siblings and planned out the service only two days after saying goodbye to him.  We planned the songs, the slideshow for the visitation, and a list of every person who wanted the chance to say something about him.

We didn’t know what to expect, but my heart was overwhelmed by the hundreds of people who came from all over the country for the visitation.  We stood for hours greeting people who had come because they loved Ben and because they loved his family.  Those are the moments that we will cherish and remember forever.

The day of the funeral dawned and once again the number of people who came from all over was truly humbling.  I asked to speak at the beginning because I had a few words I wanted to share and didn’t know if I would have strength to do it by the end… but I was so wrong.  The service was beautiful and his mom put it aptly when she said it wasn’t at all like a funeral.  Instead it was a celebration of him and his life (I’m going to share the words of the family who spoke here on the blog for the friends and family who didn’t have the opportunity to attend, but wanted to hear it).

The short graveside service was emotional for me, but I know Ben would have been blessed by the Special Forces officers and all of the friends that were there to honor him.  When we pulled into the cemetery there were people lining the streets waving flags and we once again were reminded of what an amazing man we were saying goodbye to.

If you had asked me a few years ago what I would have wanted out of a funeral for myself, I would have laughed and said it didn’t matter.  But I am in a different place now, and if given the chance to say what I would want, it would be a day just like this… a gathering of family and friends who were touched by my life and wanted to share the memories that they had with me.  Benjamin’s life may have been shorter than we felt it should, but I am so honored to have been married to a man who was so well-loved.

Have you thought about what you would want from that day?  In the past two months I have had plenty of time to think about it.  I still receive sweet notes and messages that tell me what an impact Ben had on people’s lives and I cherish every single one.  And I pray that I would be able to touch lives and make a difference in the people that I come in contact with just like that.

I had this quote hanging on the wall in my dorm room during college and I find it so fitting now:

“To laugh often and much;

To win the respect of intelligent people and the affection of children;

To earn the appreciation of honest critics and endure the betrayal of false friends;

To appreciate beauty, to find the best in others;

To leave the world a bit better, whether by a healthy child, a garden patch or a redeemed social condition;

To know even one life has breathed easier because you have lived.

This is to have succeeded.”

I believe Ben lived a life that fit this definition of success, and I pray that one day someone will be able to say that about me.  What about you?  What would you want people to say about you one day when you are gone from this earth?  Do you think that they would say it now?  I pray daily that God will allow me to make that kind of difference and I pray that for you as well! 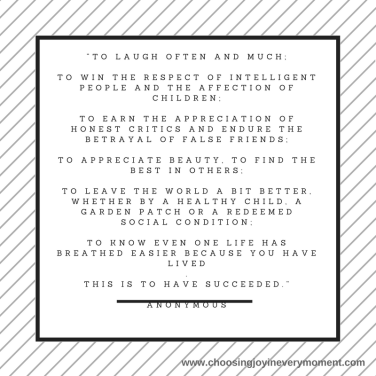 I'm Tricia, homeschooling mom of three little treasures. I recently lost my husband to brain cancer and am trying to find the balance between being a mom, dad, and running a household while failing daily at remaining calm and patient. God is teaching me how to choose joy in the moment, even when all I want to do is hide in the closet with a frozen Reese's and a bowl of ice cream! View all posts by tricia 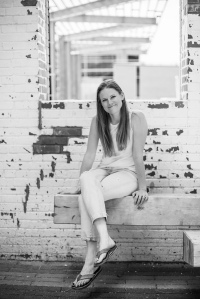 I don’t know a lot about what is happening in our country right now, but today I’m sharing the things I do know on my blog... thoughts from a widow on our nations crisis. Link in bio.