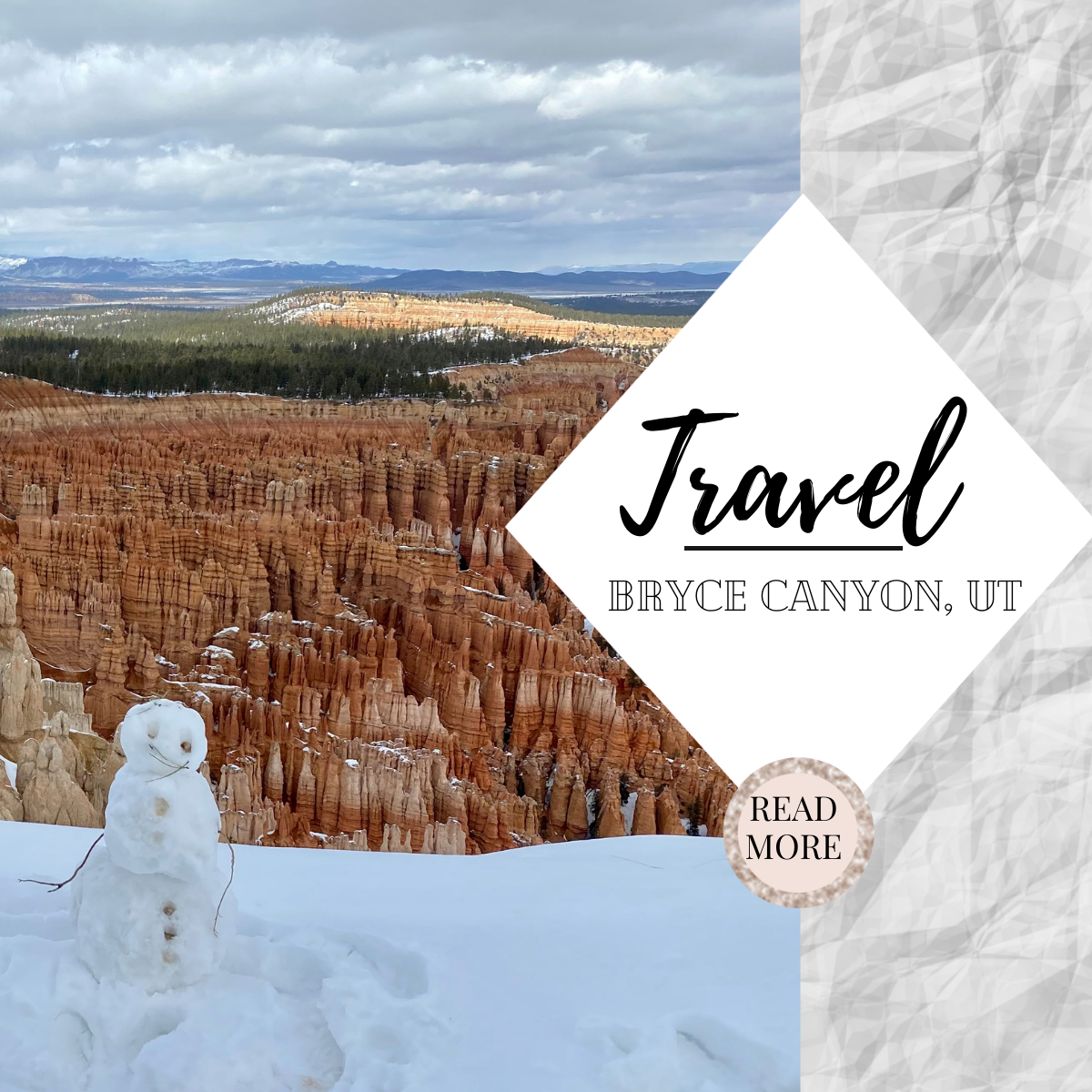 You need to add a widget, row, or prebuilt layout before you’ll see anything here. 🙂

After we left the Grand Canyon we headed north to Utah and our next stop at an AirBnb in Hurricane, UT.  This was the part of the trip that I was most excited about, and not just because of the great place we found to stay. We made it to town in time to eat dinner at a cute little café before checking into the AirBnb and getting settled for the week.

The AirBnb had 6 bedrooms which meant almost everyone had their own room which is always a blessing when we travel.  We called it an early night considering the time change so we would be able to get up the next morning for the 1.5 drive to Bryce Canyon. The drive was fairly quick and while we were on the way, we read up a little on the history of this canyon and the hoodoos that are found there.

If you have never heard of Bryce Canyon (I had not before we started planning this trip), it is not really a canyon at all!  It is actually a collection of amphitheaters that were naturally created.  While it has the appearance of a canyon it is filled with hoodoos.  Hoodoos are these tall, pole shaped columns made out of rock.  The hoodoos were what the kids were most excited to see.

Bryce is a less visited park then both Grand Canyon and Zion, so once again we did not find ourselves in large crowds of people and when we came across a natural bridge across the road we were able to jump out of the car and take pictures on the way into the park.

The sun was shining and despite the snow on the ground it was actually really nice out when we pulled into the first parking lot. We set out for a view of the rim leaving water bottles and gloves behind. We figured we would get a peek and then drive through the rest of the park to see the views from the different stops along the way. Though I secretly was hoping we would get to make the hike around the rim if the weather cooperated!

Once again we faced a view that pictures just can not do justice. While we were standing on the edge we could see the next little viewpoint just up and around the corner. We could not go back to the car without making our way to see the view from there!

Before we knew it we were standing at Sunset Point… and looking out could see the next viewpoint a ways up… and off we were hiking through the snow to Sunrise Point.  From there we could see the Queen Victoria, Thor’s Hammer, and Wall Street.

Of course I still wasn’t finished because I could see another view point just a little further 😉. The path got a little slippery from there due to the snow and ice. Not to mention there were several places where you were climbing up at a pretty steep incline. So my parents stayed back with my youngest playing in the snow while the rest of us ventured on up the hill.

The uphill trek was worth it in order to see the view from the Lower, Middle and Upper Inspiration Points. The snow covered hoodoos were breathtaking and I can see where it got its name.

We could see the Queens Garden Trail and the Navajo Loop Trail from our vantage point on the rim. Both of which I would love to do when they are not icy, wet and muddy! The kids actually said that they looked like they would be fun to hike too which says a lot.

Bryce can definitely be done in a day (or over several).  There are many hiking trails with so many different views, but if you are not a hiker, there is a lot of beauty to be beheld just by driving to and from the different viewpoints along the rim.  When all was said and done, we walked over 4.5 miles, but we passed 3 different parking areas on our trek that we could have driven to if we had not wanted to hike!

We ended the day with Thai food and then went back to the AirBnb to soak our tired bones in the hot tub.

***Our second day in Hurricane was a rest day (we always make sure to plan those so that everyone can relax, recharge, and enjoy the vacation). We woke up to snow falling, but it quickly melted so we could enjoy the outdoors. In addition to the heated pool and hot tub, the AirBnb had miniature golf, volleyball, horseshoes and a firepit in the backyard so there was plenty to do around there. In the afternoon we took an adventure to nearby St. George to look for dinosaur tracks and ended up off-roading through the mud… but that’s an adventure for another day 😉.

I'm Tricia, widow and mom to 3. I enjoy writing about parenting, traveling, and all that God is teaching about choosing joy in the moment, even when all I want to do is hide in the closet with a frozen Reese's and a bowl of ice cream! View All Posts